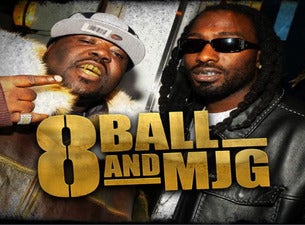 Southern rap from the 1990s may as well be its own planet of music, and two of that planet's leaders are surely 8Ball & MJG, the American hip-hop duo from Memphis, Tennessee. After meeting at Ridgeway Middle School in 1984, they toiled in the underground rap scene for years, eventually striking big with a decade-long run of hard-hitting albums.

Their first coup was the underground hit Listen to the Lyrics, released in 1993. Two years later they dropped their first official LP for Suave House, Comin' Out Hard, an early blockbuster in the Southern rap genre. It reached No. 40 on the U.S. Billboard 200. Riding the wave of that hit, the group released On Top of the World in 1995, which positively blew them up: it reached No. 8 on the Billboard 200 chart and No. 2 on the R&B/Hip-Hop chart. The album featured E-40 and Mac Mall, as well as former Geto Boy Big Mike. Its cover was designed by Pen & Pixel Graphics, who would go on to work with No Limit Records and Cash Money Records. Their cut-and-paste style is instantly recognizable to anyone who listened to any Southern rap in the ‘90s or ‘00s. On Top of The World also contained 8Ball & MJG's first charting single, "Space Age Pimpin," which reached No. 58 on the Hot R&B/Hip-Hop Singles and Tracks list and charted at No. 22 on Hot Rap Singles. Riding the fire of that album, they both released solo albums in the coming years. 8Ball's Lost went platinum, reaching No. 5 on Billboard 200 and No. 3 on Top R&B/Hip-Hop Albums. It featured Too $hort and MJG.