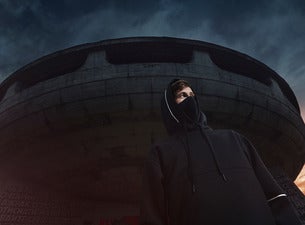 With his black hoodie and face mask, Norwegian electronic musician Alan Walker courts an everyman image. He says it's a look inspired by gamers and hackers and it's a comment on both fame and personal identity in the era of Big Data: Don the mask, and anyone could be Alan Walker.

But his accomplishments confirm that Walker is no everyman. "Faded," his 2015 breakout hit — a lilting, slow-motion synth-and-piano jam — has racked up more than 2 billion plays on YouTube and nearly a billion more on Spotify. His next six most popular songs each number in the hundreds of millions of plays.

It's no wonder Walker has connected the way he has. Taking sleek house grooves, slowing them until they turn slinky, and adding soaring vocal melodies, his songs' universal appeal stretches from headphones to house parties to the stadium — and the drive home with friends. Listen to the buoyant choruses of songs like "Darkside" and "Tired" and it's clear they were made for listeners to sing along; they only sound more electrifying as voices join in.

Raised in Bergen, the young Walker dabbled in programming and graphic design before electronic music caught his ear. He taught himself production by studying YouTube tutorials. He started under the name DJ Walkzz, and, like a true digital native, took his career into his own hands, releasing his music directly on his YouTube channel before eventually signing to Mer Musikk / Sony.

In the live arena, his rise has been just as meteoric. He made his debut at the 2016 Winter X Games in Oslo, and the same year he supported Rihanna on her Anti World Tour. His headlining Walker Tour kicked off in 2016 and carried on for the next two years, during which time he also supported Justin Bieber on his Purpose World Tour — a placement that shows how far beyond the typical EDM circuit Walker's music has traveled. He commemorated the release of his debut album ‘Different World' in December 2018 by embarking upon the Different World Tour, taking him through Europe and the U.S., with stops in Mexico for the 2019 Electric Daisy Carnival.

For proof of his live prowess, look no further than the video for "The Spectre" from late 2017. Assembled from concert footage, it's a spectacle of lasers, video mapping, and even masked and jumpsuited dancers, with Walker, face obscured, both anonymous and unmistakable behind his gear. "Hello hello, can you hear me / As I scream your name?" goes the song's opening hook; over hardstyle kicks and trance stabs, the audience screams back in unison. For the duration of the concert, everyone there is Alan Walker.