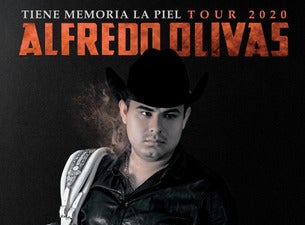 Few singers write songs about their own shootings, but Alfredo Olivas did. The song "El Paciente" (The Patient) recounts the Norteño singer's harrowing hospital experience following the attempt on his life during a 2015 performance in Chihuahua, Mexico (The city of Chihuahua banned the performance of narcocorridos after Olivas' shooting). If anything, the Bandamax Award-winner plays his accordion with more gusto and his horn players blow more strongly than ever on this thrilling track by one of regional Mexican music's most promising young stars.

Born in Ciudad Obregon, Sonora, in 1994, Olivas has been writing songs since he was 9 years old. He released dozens of singles on independent labels while still a teenager and became a familiar name on narcocorrido compilations. He eventually signed to Fonovisa Records and released his debut album, ‘El Patroncito' — an accomplished collection of evocative narcocorridos — in 2011.

The album's title track takes the point of view of a cartel boss' son, while "Las Vacaciones del Jefe" (The Boss' Vacation) opens with the line, "I haven't killed anyone...lately." After signing to Sony's Sahuaro Music, Olivas released ‘Privilegio,' whose title track likewise looked at the inner life of a crime dynasty, and it debuted at the top of the Mexican regional chart.

Olivas declared his return from death's door on the title-track opener of 2017's ‘La Rueda de la Fortuna' (Wheel of Fortune). The album marked a change in Olivas' style. On it, he steers clear of narcocorridos in favor of lighter "Norteña romantica" tracks such as "Seguramente" (Surely) and the chart-topping "El Problema."

Olivas was declared Male Soloist of the Year, and ‘La Rueda de la Fortuna' was named Record of the Year at the 2018 Bandamax Awards for Mexican regional music. "Antecedentes de Culpa" (History of Guilt) was nominated for Song of Year, an award it captured at the 2018 Radio Awards.