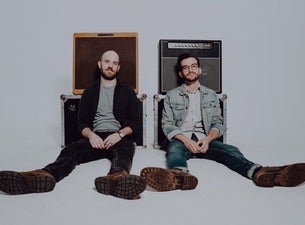 Boletos para All Get Out

Acerca de All Get Out

All Get Out in Concert

The Beatles once sang about the virtues of getting by with help from your friends. All Get Out vocalist/guitarist Nathan Hussey must wholeheartedly believe in this idea, especially since his longtime pals just so happen to be the beloved rock band Manchester Orchestra. Over much of the last decade, in both big and small ways, the latter group has given Hussey a career boost and support.

For starters, his pre-All Get Out band actually played shows with a pre-fame Manchester Orchestra in his home state of South Carolina. This association spawned an enduring relationship that led to even bigger things. Manchester Orchestra's label, Favorite Gentlemen, issued nearly all of All Get Out's releases, beginning with 2007's 'The Spitting' EP. Additionally, Hussey co-wrote 2016's 'Nobody Likes A Quitter' with Manchester Orchestra members Andy Hull and Robert McDowell; both also produced the album.

Unsurprisingly, All Get Out bears a striking sonic resemblance to Manchester Orchestra, what with Hussey's gravelly vocals, tangled drums, and abundance of stormy guitars with a decidedly emo-rock bent. Still, the group's indie-grounded sound reflects the talent and pop acumen of musicians found in Hussey's current home of Texas. In fact, his current bandmate is guitarist Kyle Samuel, a veteran session player who also performs with country acts.

In concert, All Get Out is louder, and their songs are rougher around the edges. This isn't a deterrent, though — if anything, this rawer edge loosens up their sound, and lets the group stretch and rock out. It's the perfect backdrop for the group's 2018 LP 'No Bouquet,' released via Equal Vision Records. The album boasts a spring-loaded rock 'n' roll sound that should please both '90s emo fanatics and modern aficionados. Credit All Get Out's robust support system — and those long-term friends — for endowing them with the confidence to take such a creative leap forward.