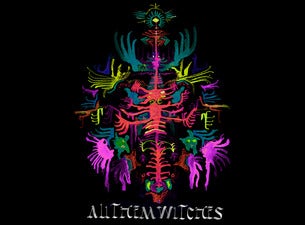 Boletos para All Them Witches

Acerca de All Them Witches

ALL THEM WITCHES IN CONCERT:

Heavy psych rockers All Them Witches have been conjuring a hypnotic blend of massive riffs, pummeling rhythms, and bluesy wails since they first threw down in 2012. Their concerts offer maximal volume to fans: bass, guitar, and keyboards blast fuzzy instrumental hooks over the pounding drums on favorites like "When God Comes Back," "Dirt Preachers," and "El Centro." When not lost in headbanging ecstasy, vocalist Charles Michael Parks, Jr. adds southern rock and proto-metal flourishes with his twangy vocals and twisted psychedelic lyrics. All Them Witches squeeze every ounce of shred out of their maniacal earworms and keep the jams going long so ticket buyers can get lost in this unforgettable and savage trip.

Charles Michael Parks, Jr. (vocals/bass) first met Robby Staebler (drums) in 2011 when the two were working together at a corporate chain store. Staebler shared some music that he'd been working on with Parks and Ben McLeod (guitar), and Parks thought a jam session was in order. They clicked instantly and decided to form All Them Witches, rounding out their lineup in 2012 with the addition of Allan Van Cleave (keyboards). Later that year the group released their debut album Our Mother Electricity, an auspicious effort that distilled their unique blend of psych rock, proto-metal, and blues. They then undertook a rigorous touring schedule and encouraged fans to exchange tapes of their marathon jams from night to night. Their unique approach to self-promotion caught the attention of doom metal quintet Windhand, who invited All Them Witches to open on their 2014 tour. Following incendiary sets at Bonnaroo and SXSW, the group signed with New West to release 2015's critically praised Dying Surfer Meets His Maker. All Them Witches continue to win over heavy music fans with their intrepid live jams, tireless touring, and prolific recorded output.