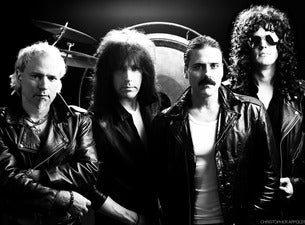 An Almost Queen show is a mix of theater, history, costumes, chops, nostalgia, harmonies, some of the most popular songs of all time and, of course, one iconic mustache. Intensely devoted, Almost Queen perform Queen's beaming four-part harmonies, blasting out faithful renditions of hits like "Crazy Little Thing Called Love," "We Are the Champions," "Under Pressure," "Radio Ga Ga," "Don't Stop Me Now" and the occasional deeper cut. They even do a live rendition of the baroque, operatic bridge of "Bohemian Rhapsody," something Queen themselves did not perform without some recording assistance. Emerging from New York in 2005, this tribute band have brought Queen's canon of triumphant arena songs to the intimate settings of clubs and theaters — not to mention stops in Peru, Mexico, the Dominican Republic and Trinidad.

Billing their act as "THE most authentic Queen live show since the days of Queen themselves," Almost Queen came not from England but from New York, keeping the legacy of Freddie Mercury and Queen alive in sound and vision. More than just Queen fans, many members of Almost Queen have serious performance bona fides. Joseph Russo (who performs as vocalist Freddie Mercury) toured as the lead in a European production of Hair. The other members — Steve Leonard (as guitarist Brian May), Randy Gregg (as bassist John Deacon) and John Cappadona (as drummer Roger Taylor) — have résumés that individually feature them touring or playing with hard rock artists like Thin Lizzy, Angel, Lauren Harris and Twisted Sister's Dee Snider. The band have appeared on Jim Breuer's Sirius radio show and were the subject of "Queen: Keeping the Spirit of Freddie Alive," an episode of the series Tribute Bands airing on E! in Canada. Iconic rock fan Howard Stern even once quipped, "These guys are even better than the Queen that's out there touring."