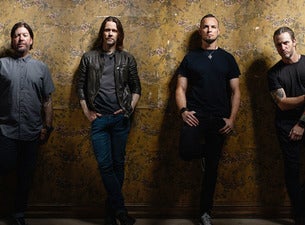 For going on a decade now, Alter Bridge has been bringing hard-driving riffs, aggressive energy, and high-voltage stage shows to ticket buyers starving for real rock. With their fourth and latest record Fortress, the Orlando, Fla.-based foursome has further refined the alternative metal sound that has become their trademark, adding an emotional intensity that has stirred anyone lucky enough to catch them on tour. (It is no wonder that their live album and concert film Live in Amsterdam rose an astonishing 15,00 spots in 8 hours when it hit Amazon in 2009.) Fortress, which debuted at #1 on the UK rock chart, features the blistering lead off single "Addicted to Pain," a searing indictment of abusive relationships. It is the kind of song fans of Alter Bridge, which rose from the ashes of Creed when that band originally broke up in 2004, have come to expect yet can still find completely surprising. Indeed, while remaining a platform for singer-guitarist Myles Kennedy's soaring tenor and the epic guitar lines or Mark Tremonti (three-time winner of Guitar World magazine's Guitarist of the Year), Fortress is by far the band's most musically adventurous album. Expect their concerts to be no less expressive and expansive.