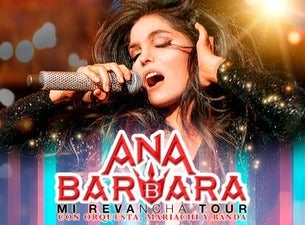 Long-regarded in Mexico as "La Reina Grupera" – the Queen of Grupera – Ana Bárbara is one of Latin music's more complex stars. Relished as much for her sex appeal and tabloid-tantalizing personal life as for her great music, Bárbara long ago committed herself to become, as she told Billboard magazine, "more than the grupera queen who moves her hips."

Bárbara has turned into a role model for other Latina artists by taking increasing creative control of her music. Born Altagracia Ugalde Mota in 1971, she adopted her stage name in 1994. She established herself as a grupera star during the '90s and won Lo Nuestro Awards for best regional Mexican female artist in 1996, '97 and '98. Her hits from that era include "La trampa" ("The Trap") and "Ya no te creo nada" ("I Don't Believe You Anymore").

Hemmed in by her image as a guitar-slinging, cowboy-hatted grupera novelty, Bárbara reinvented herself in 2001 as a mariachi-backed ranchera singer. The strictly ranchera album Te regalo la lluvia (I Give You the Rain) featured her own songs (she would become a prolific songwriter both for herself and others) and brimmed with authenticity. The albums that followed, Te atraparé...Bandido (I'll Catch You...Bandit) and the Latin Grammy–winning Loca de Amar (Crazy for Loving) were equally strong.

Bárbara surprised her fans again by leaving music for five years to raise her family. She returned in 2009 with another artistic shock, the upbeat, urban-oriented Latin pop of Rompiendo Cadenas (Breaking Chains) produced by Dominican duo Luny Tunes. She naturally followed this with another swing back into Mexican regionalism: Yo Soy la Mujer (I Am the Woman), her first album of tuba-pumping banda music, was a nostalgic trip back to the sentimental sounds that accompanied her Central Mexico childhood.

Bárbara has increasingly become an outspoken advocate of female empowerment even as her wardrobe has grown more risqué. Her catchy, romantic songs are all the more effective as the expressions of a strong female artist who has seized the reins of her career and run with them for decades.