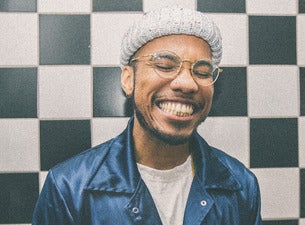 Hip hop sensation Anderson .Paak overcame plenty of obstacles on his rise from talented no-name to critical darling, and his music and his live performances both brim with the celebratory exhilaration of beating the odds. Paak's 2016 album Malibu reached new heights of soulfulness and honesty, and he does it total justice in concert with deeply moving performances that resonate with a message of love and limitless possibility. From Jimmy Kimmel Live to SXSW, .Paak has slain every stage he's graced, kicking out his eclectic blend of funk, soul, and R&B-laced hip hop with the confidence and swagger of an old pro while his backing band The Free Nationals lay down the sultry grooves. As he dances around the stage and tells ticket buyers they're beautiful, it's clear .Paak was born to perform, and he deserves every last drop of the much-deserved attention his forward-looking sound and live-wire showmanship have earned him.

Oxnard, CA-born Brandon Park Anderson was dealt a tough hand growing up. His abusive father ended up in jail and ultimately died from drug addiction, and his mother and stepfather were sent to prison for securities fraud when he was 17. But rather than succumb to hardship he poured his energy into music, playing drums in his church's band and starting to produce beats bin his bedroom as a teenager. He released an album under the name Breezy Lovejoy in 2012 before working as a drummer on American Idol, and in 2014 he turned heads with the LP Venice, his debut as Anderson .Paak (the dot stands for "detail" in honor of his fastidiousness approach to rapping and producing).  The release garnered the attention of Dr. Dre, who took the young rapper under his wing and featured him extensively on his 2015 album Compton, and .Paak's breakout performance on the record gave his profile a major boost. With anticipation for his third album at a fever pitch, .Paak delivered on the hype with 2016's Malibu, a critical masterstroke that earned Best New Music distinction from Pitchfork and kicked off the Malibu World Tour.