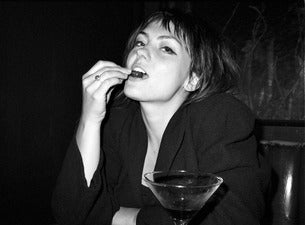 Alternative folk singer-songwriter Angel Olsen's voice is the kind that can stop you dead in your tracks. It's hauntingly beautiful and charged with passion, and ticket buyers just can't get enough of it at her unmissable live shows. From the rockabilly "Hi-Five" and the sprawling "High & Wild" to the electric, distorted "Forgiven/Forgotten", her songs have an emotional pull that's even more entrancing in person. Olsen alternates between performing solo with an electric guitar and playing with the rest of her band, comprised of a guitarist, bassist, and drummer. Regardless of who's on stage with her, Olsen's stellar performances are always steered by her poignant voice, rich lyricism, and commanding stage presence.

Angel Olsen grew up in St. Louis immersed in her parents' favorite music -- from the Everly Brothers' beautiful harmonies to Skeeter Davis' country-pop prowess. As a teenager she performed in coffee shops around St. Louis and Chicago and was eventually discovered by Cairo Gang leader Emmet Kelly. Kelly passed her music on to esteemed folk artist Will Oldham, who invited Olsen on tour with him. She spent the next couple years as Oldham's backing vocalist, touring all over the world and appearing on two of his studio albums. In 2012 she kicked off her solo career by releasing the understated yet passionate EP Strange Cacti and touring alongside Kurt Vile and Neko Case. Since then she has released two studio albums, 2012's Half Way Home and 2014's Burn Your Fire For No Witness, earning critical praise and headlining shows across the country. A rare talent with a world-class voice, Olsen continues to thrill concert goers with spellbinding live shows.