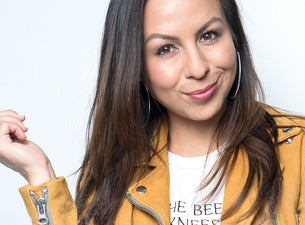 San Jose, California native Anjelah Nicole Johnson made a huge splash with one of the most successful viral comedy videos of all time, "Nail Salon." This was one of the most-viewed YouTube and Google videos of 2007, and propelled Anjelah to new heights of touring, television and beyond.  Her second Youtube video "Bon Qui Qui at King Burger," a Mad TV sketch has also drawn millions of hits. Anjelah has a devoted following in comedy clubs, online communities, colleges and churches everywhere. Anjelah got her start as a Pop Warner cheerleader, and continued cheering through high school, college, and finally professionally, for the Oakland Raiders. As an Oakland Raiderette, she was named Rookie of the year and performed in Super Bowl XXXVII. You've seen Anjelah in multiple ads & commercials, including campaigns for Sprint, Visa, Snickers, Verizon, All-State, Washington Mutual, K-Swiss, and Dryers Ice Cream.  As well, Anjelah has guest starred on The Shield and Love Inc., and co-starred with Gabrielle Union in the feature film The Box.  She also co-starred in the Dave Caplan pilot for TBS.  Anjelah recurred on FOX's long running hit sketch series MADtv, proud to be one of the first Latina comedians to be invited to join a sketch comedy series.  She was honored with a 2008 ALMA Award nomination for "Outstanding Female Performance in a Comedy Television Series." A wildly successful stand-up comedian, Anjelah has had the privilege of performing for our troops in Guantanamo Bay, Cuba, and continues to tour the country, playing to sold-out comedy clubs including Cobb's, The Punchline, San Jose Improv, the Irvine Improv, the Ontario Improv, Brea Improv, Houston Improv and Miami Improv.  In 2008, Anjelah was thrilled to be invited to showcase her standup in the "New Faces" category at the 26th Annual Just For Laughs Montreal Comedy Festival. In June 2009 Anjelah recorded a one-hour special for Comedy Central and a Warner Brothers Records DVD to be released in February 2010.  She has also recently worked on "Our Family Wedding" where she will be acting alongside Forest Whitaker and "Alvin & the Chipmunks 2 - The Squeakuel" which was released in December 2009.
Anuncio