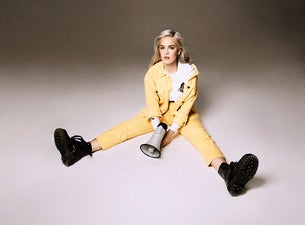 Although Anne-Marie only released her full-length debut 'Speak Your Mind' in 2018, the Essex, England, native has been a ubiquitous pop music presence for several years now. Chalk that up to her malleable, R&B-tinted voice, which is conspiratorial on the nostalgic hit "2002," smolders with anger on the Marshmello collaboration "Friends," and exhibits dancehall influence on the reggae-influenced kiss-off "Ciao Adios."

Born Anne-Marie Rose Nicholson, she started singing as a young child. As a preteen, she even appeared in professional theater productions of Les Misérables and Whistle Down the Wind when she wasn't studying karate (Anne-Marie is a black belt). After guesting on tracks by Magnetic Man and Gorgon City, the aspiring vocalist received a big break from the electronic act Rudimental, and she appeared as a featured vocalist on four songs on 2015's 'We the Generation.'

Since then, her global presence has only increased. She was named MTV's Brand New winner for 2016, while "Rockabye" won Best Global Track at the WDM Awards and was nominated for Dance Song of the Year at the 2018 iHeartRadio Music Awards. "Friends," meanwhile, won two 2018 MTV Video Music Awards Japan — Video of the Year and Best New: International.

The accolades are well-deserved; Anne-Marie's live show is a delight that lets her down-to-earth persona shine through. Best of all, her voice is even more welcoming live than it is on record — all low-key charisma and warmth that brings nuance and depth to her songs.