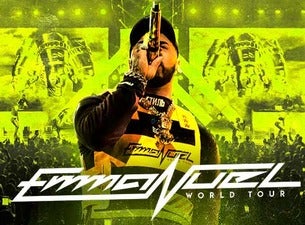 With his bad-boy swagger and nonchalant coolness, Anuel AA's live performances are nothing short of exhilarating. Whether audiences are head-bobbing to his slick trap tunes or "perreando hasta abajo" via his riveting reggaeton, this Puerto Rican rhymester puts up a scene you don't want to miss.

After the success of his 2018 full-length album Real Hasta La Muerte, Anuel AA geared up to go on a second North American leg of his tour. He kicked off at the urban, star-studded MiamiBash in April 2019, and the fiery reggaetonero is making numerous stops in spring and summer on both coasts as well as in Texas.

Born Emmanuel Gazmey Santiago in Carolina, Puerto Rico, rapper Anuel AA began performing in 2009 at age 16, at the tail end of reggaeton's first international boom. His father, a VP for Sony's A&R department, initially helped link the young lyricist with some of the island's best-known names in urban music at the time, such as Tempo and Ñengo Flow.

From there, Anuel AA released his debut single, "Demonia," along with Ñengo Flow in 2011. By the early 2010s, reggaeton's second revival was beginning to bubble, and Anuel AA was just getting started, connecting with artists who would become some of today's biggest players on the scene: Ozuna, De La Ghetto, and Arcángel.

He quickly ascended to global stardom with his smash single "Sola," gaining further exposure when the song received the remix treatment by superstars like Daddy Yankee, Farruko, and Wisin. Between 2016 and 2018, Anuel AA released a slew of tracks and collaborated with powerhouses like J Balvin, Bad Bunny, and Nicky Jam. In 2018, he surprised fans with the album Real Hasta La Muerte, and he then joined forces with Colombian urban star Karol G and released several singles.