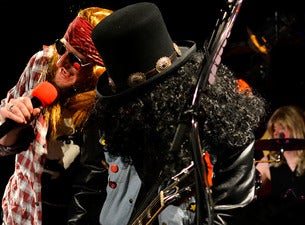 Appetite 4 Destruction creates the most accurate and astounding Guns N’ Roses tribute experience around, carrying on the great band's legacy with the utmost craftsmanship and respect. Their Axl looks and sings like Axl, their Slash looks and shreds like Slash, and they play GNR's greatest hits with such precision that fans are left pinching themselves. Each time they take the stage, Appetite 4 Destruction transports audiences back to the permed hair and acid washed jeans of the late '80s/early '90s, and their upcoming shows are sure to be no different.

For 15 years running, Appetite for Destruction has been performing their signature Guns N’ Roses tribute show to sold-out audiences across the country. With Rob Pfeffer as Axl, John Ricotta as Slash, Andrew D’Amato as Izzy, Mike Ficalora as Duff, and Shawn Callahan as Steven, the band pays some serious attention to detail in their look, sound, and feel. Billing themselves as "the world's most dangerous tribute to Guns N' Roses," Appetite for Destruction are sure to bring some serious showmanship to the stage as they hit the road for another round of tour dates.

"A great time! Hands down one of the most fun shows I've been to. The band looked the part sang all the hits you wanted to hear!"

"These guys did a great job of recreating the G'n'R experience! At times I felt like I was seventeen again and listening to Axel rock out like in 1987!"

"This is a rockin' cover band of GnR and Guns fans won't be disappointed. The lead singer is spot on and Slash's guitar pieces are treated with the respect they deserve."