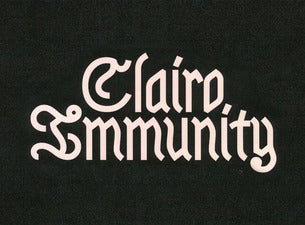 Seventeen-year-old Clairo pretty much won the Internet in 2017 with her gently ironic "Pretty Girl," which has been viewed more than 37 million times. She has since evolved into a full-fledged indie pop presence loaded with DIY credibility and an enviable work ethic. On the strength of songs from her EP Diary 001, she toured in 2018 and made a Lollapalooza appearance, and a year later she hit the road in support of her debut album, Immunity. Whether rocking a guitar or a keyboard, Clairo generates tremendous empathy and intimacy as she sings about the joys and insecurities of young romance, sometimes raising the roof but mostly communicating with the hushed confidentiality of a trusted friend.

While a lot of pop music is about striking a pose, Clairo's budding career is based on cornerstones that include honesty and authenticity. Born Claire Cottrill in Massachusetts in 1988, Clairo took advantage of democratic platforms like Bandcamp and SoundCloud to release early teenage efforts recorded with an acoustic guitar and a flea-market drum machine. After "Pretty Girl" went viral on YouTube, she began to take her career more seriously. She released tougher and craftier tracks, like "4EVER" and "B.O.M.D.," on her 2018 EP Diary 001, which The New York Times praised as "the thoroughly modern type — Spotifycore? — calibrated for repeated streaming from computer speakers."

Regarding Immunity, her 2019 debut album, Pitchfork reported the uptempo tracks to be "breezy and chill," and the ballads "lush and deeply felt." In songs that combine old-fashioned soft rock with contemporary R&B, Immunity alludes to Clairo's health issues, her bisexuality and the quiet intimacies of being alone with a lover, a friend or just oneself. Clairo has come a long way from the awkward teen who fretted over her appearance. She has become the musical den mother of an even younger cohort of fans attracted to her chillness, her sinuous, understated melodies and, most of all, her refreshing honesty.