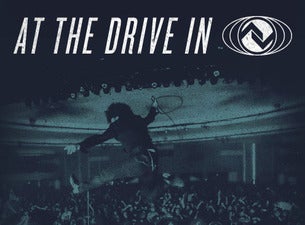 Boletos para At the Drive In

Acerca de At the Drive In

AT THE DRIVE-IN IN CONCERT:

Post-hardcore quintet At the Drive-In always gives audiences a show that’s just as powerfully cathartic as it is sonically adventurous. The band builds each song around the familiar pummeling power chords and screaming vocals of hardcore, but they also push the envelope by launching into off-kilter riffs and noisy sonic explorations. This is largely thanks to the efforts of guitarists Omar Rodriguez-Lopez and Jim Ward, who combine jazzy melodies, face-melting riffs, and swirling sound effects to bring a richly textured musical experience to fans. Vocalist Cedric Bixler-Zavala is a lightning rod for all the energy, creativity, and intensity of the group’s diverse sound, stalking around the stage as he shouts his cryptic, angst-fueled lyrics into the microphone. With gut-check throwdowns like “One Armed Scissors”, “Alpha Centauri”, and “Invalid Litter Dept.” at the ready, At the Drive-In always blows ticket buyers away with the freewheeling post-hardcore show of their lives.

El Paso friends Jim Ward and Cedric Bixler-Zavala formed At the Drive-In in 1993 and released their debut EP Hell Paso the following year. Soon the group was touring the Western US, amassing a loyal following on the way to releasing their 1996 debut album Acrobatic Tenement. Their 1998 sophomore LP In/Casino/Out won critical acclaim after the band decided to capture the energy of their concerts by recording live in studio. 2000’s Relationship of Command one-upped its predecessor and has become one of the defining albums of the post-hardcore genre, but also captured the band at a crossroads -- Bixler-Zavala and guitarist Omar Rodriguez-Lopez left the band after the album’s release to pursue more experimental music in The Mars Volta, while Ward brought the remainder of the band with him to form alternative rockers Sparta. Though both parties enjoyed success for more than a decade following the split, At the Drive-In thrilled fans in 2012 with the announcement of a reunion. Since getting back together the group has brought nothing but the same hard-hitting live energy that made them infamous in the first place.