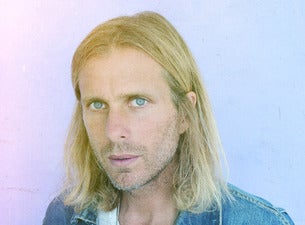 You know the grit-filled track "Sail" from TV shows House, The Good Wife, Longmire, So You Think You Can Dance, and from action-packed commercials for Nokia and Under Armor. Aaron Bruno's music strikes a raw chord that sets the stage for suspense. The 2011 debut album Megalithic Symphony, featured singles "Kill Your Heroes," "Not Your Fault," and "Sail," which peaked at No. 17 on the U.S. Billboard Hot 100 and sold nearly 4 million copies in North America.

Not your typical electronic band, Awolnation's music is made to be played with live instruments capturing the pure energy only analog can produce. Blame Bruno's past as a member of the funky, soul, indie-pop band Under the Influence of Giants, or his time with the heavy pop-punk band Hometown Heroes. If you ever score a ticket don't expect a DJ booth, but a pulsating energetic concert that screams rock ala Nine Inch Nails with a healthy side of pop.
Bruno has been compared to the eclectic Beck for blending genres in Megalithic Symphony. He's taken influences that wouldn't fit in his bands' music, so he infused them in his solo creative outlet, Awolnation.  The name is not political, but came from the military acronym "Absent WithOut Leave." In high school he'd often skip out on friends without saying goodbye, his pals gave him the nickname Awol - the rest is music history.

Awolnation is scheduled to release the new album in 2014. You can hear two songs of the unreleased album like "ThisKidsNotAlright," in the videogame Injustice: Gods Among Us, or "Some Kind of Joke" from the Ironman 3 soundtrack. The album is currently untitled, but if the first two tracks are glimpses into the future, fans can expect one  kick "A" world tour.
Anuncio