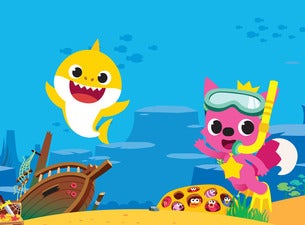 Baby Shark Live! is going on its first-ever North American tour starting on October 3, 2019. The live show based on the popular "Baby Shark" children's song and viral video is a fully immersive concert experience from Pinkfong and Round Room Live.

The show is touring more than 30 cities over six weeks including New York, Los Angeles, San Jose, Dallas, Chicago, Boston and Philadelphia. Additional shows will be announced at a future date. Baby Shark Live! is expected to visit more than 100 U.S. and Canadian markets through 2020. Add-ons are available as a Meet & Greet Upgrade with Baby Shark and Pinkfong for an additional fee. Children must be accompanied by a parent or guardian.

Fans of all ages will be entertained as Baby Shark joins his friend, Pinkfong, on an adventure into the sea. They sing and dance while educating young minds through new and classic songs including "Five Little Monkeys," "Wheels on the Bus," "Jungle Boogie," "Monkey Banana Dance," and, of course, "Baby Shark!" Pinkfong's global hit song about a family of sharks climbed the charts and connected with fans around the world. After entering the Billboard Hot 100 at #32, the song had a 17-week streak in the Top 50 while topping the Kids Digital Song Sales Chart. The Baby Shark Dance video has over 3 billion views, making it the 8th most viewed video in the history of YouTube.