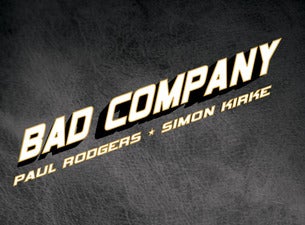 The band that helped define hard rock in the 1970s, Bad Company remains one of the most exciting purveyors of the heaviest of sounds. The incomparable voice of Paul Rodgers may be the biggest reason for the enduring power of Bad Company classics like "Feel Like Makin' Love" and "Rock ‘n' Roll Fantasy."

The latest chapter in the history of this British rock institution began when the surviving original members reconvened in 2008. Revitalizing a repertoire drawn from such hit albums as 1974's Bad Company and 1976's Run With the Pack, Rodgers earned Bad Company a new generation of fans with the help of co-founder and drummer Simon Kirke — who'd originally joined the frontman in the British rock band Free — and two more recent recruits in longtime Heart guitarist Howard Leese and bassist Todd Ronning.

Bad Company's summer 2019 tour includes two concerts with Lynyrd Skynyrd, who were their tourmates for a joint 40th Anniversary Tour in 2013 and The Last of the Street Survivors Farewell Tour in 2018.

Of all the rock supergroups of the ‘70s, Bad Company had the most unbeatable pedigree. Formed in 1973, the band combined the powerhouse team of vocalist Paul Rodgers and drummer Simon Kirke — both of Free, the rockers behind "All Right Now" — with Mott the Hoople guitarist Mick Ralphs and King Crimson bassist Boz Burrell. Under the guidance of legendary Led Zeppelin manager Peter Grant, the new band quickly became one of the biggest acts in rock.

Released in 1973, Bad Company's multiplatinum self-titled debut boasted a blues-based sound that was undeniably heavy yet just as remarkable for the players' agility and the songs' R&B swagger. It inaugurated an incredible run that continued with four more hit albums and such hit singles as "Bad Company," "Feel Like Makin' Love," and "Rock ‘n' Roll Fantasy."

After the original lineup splintered in 1982, Rodgers would find success as the leader of The Paul Rodgers Band and as a creative partner for his friend Jimmy Page in The Firm. The reunion of all four members at Peter Grant's funeral led to new recordings and new tours between 1999 and 2002. In the wake of the singer's hugely successful collaboration with Brian May and Roger Taylor in Queen + Paul Rodgers, Bad Company was relaunched in 2008 and continues to make good on its heavy-duty reputation.