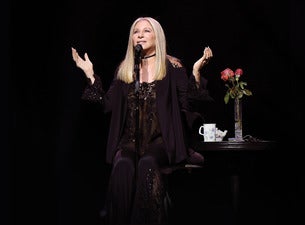 In August 2019, Barbra Streisand returned to New York's legendary Madison Square Garden for the first time in 13 years; the show marked her first New York date since playing at Barclay Center in her home borough of Brooklyn in 2017. She warmed up by headlining London's British Summer Time festival in Hyde Park the month before.

"There are no fans like New York fans," the singer had said in a press release, "and I can't wait to return to Madison Square Garden to perform some new songs, some old songs, and anything I find in-between."

At 77, Streisand had little to prove — other than that she could still deliver a powerful performance. She has released 52 gold, 31 platinum, and 13 multiplatinum records in addition to five No. 1 singles. She has won a dozen Grammy Awards, three Academy Awards, five Emmy Awards, assorted lifetime-achievement awards, and a Presidential Medal of Freedom.

Streisand's first educational experience was in an Orthodox Jewish yeshiva. She drew upon that experience for ‘Yentl' (1983), the first major studio film a woman wrote, produced, directed, and starred in. Streisand struggled as a young performer but broke out in 1962 with a lead role in the Broadway musical ‘I Can Get It for You Wholesale.' This led to a long string of television appearances and kudos from the likes of comedian Phyllis Diller, for whom Streisand opened on tour.

Her 1963 debut album hit the Billboard Top 10 and earned her three Grammys, and she eventually became the best-selling female music artist of all time. Pensive and emotional singles such as "People," "Happy Days Are Here Again," and "The Way We Were" made her a household name. Hit collaborations like "Guilty" (with Barry Gibb) and "I Finally Found Someone" (with Bryan Adams) helped her remain a chart presence through the '90s. Her most recent album, ‘Walls' (2018), included the defiant single "Don't Lie to Me." Still an outspoken public figure due to both her politics and her pet cloning, Barbra Streisand remains a performer for the ages.