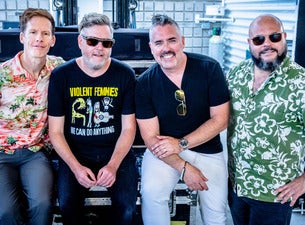 The Barenaked Ladies have been honing their musical and comedic chops since playing gigs around Canada with a comedy troupe in the late 1980s. Starting out as an acoustic duo, they quickly expanded into a full-fledged band and became well-known for their fun and dynamic live shows, where they’d throw in some of their improv and rapping skills. Since those early shows, the Ladies have been performing nearly continuously on tours that have crisscrossed the globe. Since 2004, they’ve been especially focused on the environment, offering eco-friendly options at their shows and using biodiesel to get around on the road.

With an amusing mix of pop, rock, sincerity and humor, the Barenaked Ladies are one of Canada’s most endearing exports. Over the years, they’ve been in a constant state of evolution, scoring hit singles in the ‘90s, contributing theme songs for TV shows like The Big Bang Theory and Odd Job Jack, releasing a holiday album, dropping an award-winning children’s album and even creating a popular fan cruise (called “Ships and Dip”). The band started humbly enough in the late ‘80s, as just an acoustic duo, featuring vocalists and schoolmates Ed Robertson and Steven Page. The name Barenaked Ladies started out as a joke, but ended up sticking — and the fact that it came off slightly scandalous ended up being to their advantage. After adding brothers Jim and Andy Creeggan and drummer Tyler Stewart to the mix, the band self-released The Yellow Tape EP in 1991. It proved to be a big success, mostly via word of mouth and their live shows. That same year, they were invited to perform at the New Year’s Eve concert outside Toronto’s City Hall, but were denied by then-mayor June Rowlands who denounced the band’s name as sexist. This minor controversy only raised the Ladies’ profile, and The Yellow Tape became the first independently released album to go platinum in Canada. They subsequently signed with a major label, Sire Records, and released their debut album, Gordon, in 1992. Folky singles like “If I Had $1,000,000” and “Brian Wilson” would become some of their most popular songs, but it’d take a few more albums before the Ladies finally topped the charts with 1998’s rapping sensation “One Week.” Going into the 21st century, the band would continue on an impressive recording spree, especially once they went back to being independent and created their own record label, Desperation Records. They released a few popular themed albums, including 2004’s Barenaked for the Holidays and 2008’s Snacktime! for kids. Even after original member Page left the band in 2009, the Barenaked Ladies have continued on, with albums like 2017’s Fake Nudes, and a number of tours around North America and beyond. In 2018, they were inducted into the Canadian Music Hall of Fame after 30 years as a band.