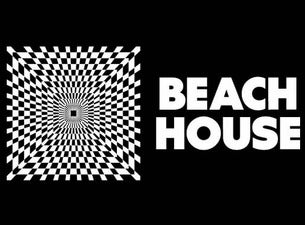 Dream pop duo Beach House plays a haunted rendition of ‘60s-style pop that is sure to captivate and mystify audiences wherever the group plays on tour. Singer/keyboardist Victoria Legrand is the focal point in concert, supporting her smoky vocals and graceful melodies with retro organ chords. Cutting through melodic basslines and minimal drum shuffles, guitarist Alex Scally weaves an intricate tapestry of chiming guitar notes. These sparse elements sound straightforward enough, but the group slowly adds layer after layer to create a climatic wall of sound on miniature epics like “Zebra”, “Norway”, and “Used to Be”. Ticket buyers can’t help but be swept off their feet as Beach House carefully constructs each intricate and atmospheric gem at their unforgettably hypnotic concerts.

French-born vocalist/organist Victoria Legrand originally recruited Alex Scally to play bass for her Baltimore pop band in 2004, but he quickly romanced her away to form Beach House. Excited by the level of creative control they could achieve as a duo, the kindred spirits began composing their self-titled 2006 debut. Their atmospheric and mysterious take on classic pop struck an immediate chord with fans and critics, leading Pitchfork to name their debut one of the best albums of the year. The band signed to Sub Pop for 2010’s Teen Dream, which marked a major creative and commercial watershed for the band. While they’ve received increased attention in the following years, Beach House has kept their creative process unfettered: two best friends meticulously constructing one ethereal pop masterpiece after another. The results continue to transfix live audiences in concert and fascinate listeners on their recorded material, such as their critically praised 2015 album Depression Cherry.