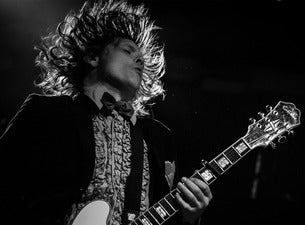 Beach Slang play a devil-may-care brand of punk that’s sure to speak to anyone who’s ever broken the rules. The quartet of emo-tinged rockers reveal a penchant for reckless abandon in their music, which translates into a cathartic rush for ticket buyers whenever the group takes the stage. Frontman James Alex wears his heart on his sleeve, filtering his angst into raging anthems like “All Fuzzed Out”, “Dirty Cigarettes”, and “Bad Art & Weirdo Ideas”.  Punk fans are turning out in force to feel the emotional release and undeniable energy of Beach Slang’s passionate rallying cries on their 2015 tour.

Beach Slang came out of nowhere in 2014, but they’re actually an unlikely supergroup of underground Philly punks. After recording five celebrated emo-punk albums through the ‘90s and ‘00s with local scene heroes Weston, vocalist/guitarist James Alex is more than qualified to lend his voice to disenfranchised youth in this new project. Drummer JP Flexner (Ex-Friends), bassist Ed McNulty (Crybaby), and guitarist Ruben Gallego have joined forces with Alex, adding a muscular power to his songs. After releasing two critically praised EPs in 2014 -- Cheap Thrills On A Dead End Street followed by Who Would Ever Want Something So Broken? -- Beach Slang generated even more buzz with a rigorous touring schedule across the US. While they continue to win fans over with their unbridled live performances, Beach Slang thrilled fans and critics alike with the 2015 release of their debut album The Things We Do to Find People Who Feel Like Us.