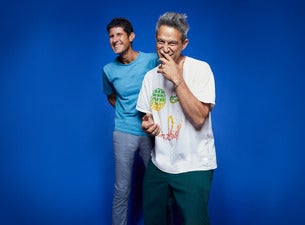 Some bands are bigger than music. Over the course of more than 30 years, eight albums, three Grammys, and one Rock and Roll Hall of Fame induction, Beastie Boys have risen beyond their hip-hop/hardcore origins to become icons of American pop culture.

Now minus a member — Adam "MCA" Yauch died from cancer in 2012 at age 47 — Adam "Adrock" Horovitz and Michael "Mike D" Diamond carry on the Beastie Boys' legacy of innovation, deep-seated musical fandom, and infectious love for life. To wit: their most recent endeavor, Beastie Boys Book, published in October 2018.

The massive, 590-page tome is a memoir, but hardly in the traditional sense. It features first-person storytelling by Horovitz and Diamond along with contributions from Amy Poehler, Colson Whitehead, Spike Jonze, Wes Anderson, and many more, plus rare photos, original illustrations, a cookbook by chef Roy Choi, a graphic novel, a map of the Beastie Boys' New York, and mixtape playlists. The remaining Beastie Boys even did a book tour, bringing a DJ-backed, audio-visual storytelling performance to their native New York, plus Los Angeles, San Francisco, and London.

Part of the reason Beastie Boys Book debuted at the top of the New York Times best-seller list is that the story of the Beastie Boys is perfectly emblematic of the final two decades of the 20th century. In fact, one could describe the band as the Forrest Gump of pop music (though give or take beer bashes and acid trips, it's almost certain that the Beastie Boys have always operated at full mental capacity).

These days, hip-hop and punk rock are so ubiquitous they've become lifestyles unto themselves, but there was a time when neither existed. Beastie Boys were born into the fertile cultural melting pot of '70s New York City at the time when hip-hop and punk began to emerge, the former from Queens and the latter from downtown Manhattan. As teenagers, Yauch, Horovitz, and Diamond were at the front lines, beginning their collective careers at the same time the music was entering popular consciousness.

From there, they coincided with the advent of MTV and, a decade later, the Internet. The Beastie Boys harnessed the most crucial cultural evolutions of their time — to define themselves, to share their enthusiasms, and to elevate their own creativity, and they took their fans with them. Those fans have remained alongside the band every step of the way, solidifying the Beastie Boys as the true voice of a generation.