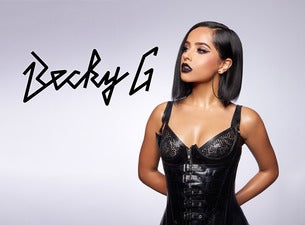 Pop ingenue Becky G is the latest young star to translate YouTube fame to pop chart success. Her creative videos of pop and hip-hop covers turned all the right heads in 2011, resulting in a deal with Dr. Luke on his Sony imprint. Since then, the precocious young singer has proven herself to be a multi-talented performer, treating fans to rapping, dancing, and some seriously buzzworthy energy at her live shows. A featured act on Austin Mahone's 2014 MTV Artist to Watch tour, fans can expect big things from Becky G as she continues her charge to full-blown pop stardom.

Born and raised in Los Angeles, Becky G got her start in show business as a way to help her cash-strapped family move out of the converted garage they were sharing at the time. Following some voiceover gigs and brief stints in two girl bands, she turned to YouTube as a creative outlet, eventually catching the eye of famed producer Dr. Luke. After signing to Luke's Sony -owned label Kemosabe Records, Becky made her major label debut with 2013's Play it Again EP. The record's title track peaked at No. 2 in the UK, exposing her to a wider audience and building anticipation for her 2014 full-length debut.