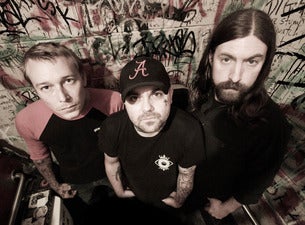 Just when you thought Southern rock was said and done, along comes Beitthemeans, swaggering out from a dark shed somewhere deep in the pines of Sylacauga, Alabama. The name is fitting for a power trio that is all about boot straps, whether it's pulling them up or using them to beat their way out of a smoldering genre that could benefit from a whipping or two. With swelling riffs, bluesy throwbacks and a lead singer with a screech that must be part owl, BITM certainly cracks the whip on Southern rock.

It's a natural pairing, considering Nuby's roots in alternative Southern rock. He currently plays in a Birmingham-based band called Vulture Whale, was a founding member of the band Verbena and has worked extensively with folks like Amy Ray and Dave Grohl.

"They're Southern rock, no doubt, but with a hint of the occult," Nuby says. "And, lyrically it's completely truthful...singing songs about salvation and sin, about getting by in crazy, small-town Alabama."

It doesn't hurt either, that Jones' startling scream is a full-on invocation to the dirty ghosts of rock and roll's past, present and future. The band challenges all that has been and is to come of Southern rock and roll, making Head Held High a revival of sorts. Instead of resting on the laurels of the music royalty they admire: Son House, Led Zeppelin, The Allman Brothers, Soundgarden, Nirvana, BITM left inspiration at the shed door and emerged on their own time, only after capturing a hell-bent sound they could claim as their own. And that's what rebel punks should do.