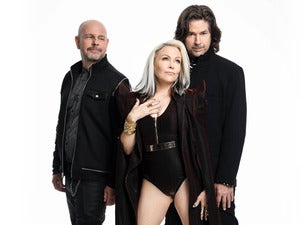 LA new wave favorites Berlin rose to international acclaim in the early '80s with a string of synth-laden hits anchored by Terri Nunn's powerful voice and charismatic persona. Three decades later, Nunn and co. sound as fresh as ever, flooring fans with razor-sharp, infinitely cool renditions of classics like "The Metro" and "No More Words." As stylish today as they were in the '80s, Berlin is sure to take fans' breath away on their upcoming tour dates.

Formed in LA in 1978, Berlin got an initial boost when their early single "Sex (I'm A...)" was banned by several radio stations for its graphic lyrics — a move that only heightened the band's popularity with fans. Their gold-selling 1982 debut album Pleasure Victim added to their risquè reputation, establishing them as one of new wave's biggest bands with hits like "The Metro" and "Masquerade." 1984's Love Life was a similar success, boasting the dance floor-ready "No More Words," but it was the 1986 release of Count 3 & Pray that launched them to the apex of their fame. Lead single "Take My Breath Away" was featured in 1986 blockbuster Top Gun, propelling the album to the top of charts around the world and earning the band an Academy Award for Best Original Song. A consummate live act renowned for Nunn's seductive stage presence, Berlin gives fans much to look forward to as they hit the road on an upcoming tour.

"Terri is unreal, her voice is outstanding. This venue cannot contain her voice nor can the speakers."

"So much fun and Terri still brings it, just as enthusiastic and energetic as ever. She seems to not age. Still the BOMB!"

"Terri Nunn is amazing!!! Her voice is incredible. I would see them play again and again!"