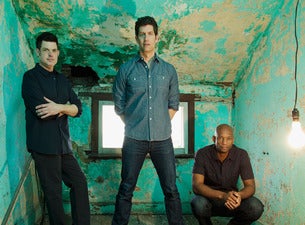 BETTER THAN EZRA IN CONCERT:

New Orleans' hometown heroes Better Than Ezra dominated '90s airwaves with a string of ubiquitous, fuzzed-out alt-rock hits like "Good" and "Desperately Wanting." The band's poppy, sing-along anthems came to define the sound of a generation, making each live show something of a reunion for their devoted fans. The elation was palpable at their 2013 shows, and with a new album due out in summer 2014, Better than Ezra will be delivering bigger than ever on their 2014 tour dates.

Formed by four Louisiana State University students in the late '80s, Better Than Ezra cut its teeth performing at fraternities and house parties before going on to generate buzz with their cassette-only demos. After self-releasing 1993's Deluxe, the band landed a deal with Elektra Records, who reissued the album in 1995. The record was an overnight sensation upon its re-release, spawning hits like "Good" and "Rosealia" and going on to achieve platinum certification from the RIAA. Five more albums of infectious alt-rock would follow, setting the stage for a highly anticipated new album in 2014.

"Great show! Ezra never disappoints! They are amazingly talented and have fun performing so that makes it so great!"

"Great show! Perfect blend of old and new, humor and covers...crowd ranged from early 20s to 50s and all seemed to have a great time!"

"BTE does such a fantastic job of providing a unique show... They always have new musicians backing up or guests who make each show unforgettable in its own way."