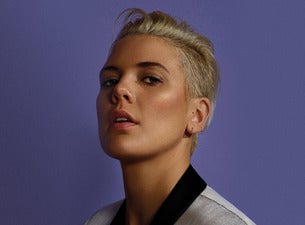 BETTY WHO IN CONCERT:

Betty Who's infectious pop tunes are taking the world by storm -- the adorable songstress is charming audiences with her platinum-blonde pixie cut and signature red lipstick, channeling her inner Marilyn Monroe on stage. Whether she's rocking out to her hit "Somebody Loves You" or performing a stripped-down acoustic version of "Giving Me Away,"  the Australian singer mesmerizes with her killer voice. Betty Who's '50s style and charismatic pop hits will be on full display as she hits the road to play cities in the US and UK, dancing with fans along the way.

Born in Australia, Jessica Anne Newham, a.k.a. Betty Who, became involved in music at a very young age, training in classical cello at four years old and teaching herself piano and guitar. During her college years she adopted the moniker Betty Who and began working with Peter Thomas, a producer who helped her develop her unique music style. She released her '80s-inspired breakout single "Somebody Loves You" in 2012, landing at No. 1 on the Billboard Dance/Club Play Songs chart and earning a spot on TIME Magazine's list of 14 Musical Acts To Watch in 2014. She topped the charts once again with 2014's Slow Dancing EP, proving she's an act on the rise with a unique sound that's been praised by critics and fans alike. Betty's dance pop will have fans ready to party as she heads out on a fun-filled tour, sharing upbeat tracks from her highly acclaimed EPs.

"Betty Who is amazing...Although her recordings are fantastic, she sounds even better live. I will probably go to all of her shows if she's ever in the area....She's worth it, of course!"

"One of the most amazing live pop performers I've heard since Lady Gaga 6 years ago! A must-see!"

"If you love to dance, love great music, and want to leave at the end of the show happy, then follow this pop artist around!"