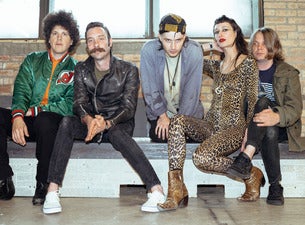 Atlanta's Black Lips are masters of barn-burning garage rock, combining the jangly insouciance of lo-fi and the infinite attitude of first wave punk to arrive at a singular swamp-garage sound.  The frenetic energy of their recordings is surpassed only by their antic-filled live shows, where fans mosh with reckless abandon to tightly wound nuggets like "Family Tree" and the band performs an endless variety of crowd-pleasing lewd stunts. Hot on the heels of their seventh album Underneath the Rainbow, the band will treat fans to another string of deliciously bawdy shows on their 2014 North American tour.

Formed in Georgia in 1999, Black Lips have been thumbing their noses from the get-go, only intensifying their anarchic behavior after guitarist Cole Alexander and bassist Jared Swilley were kicked out of high school for constituting a "subculture danger" in a post-Columbine world. Over the course of several helter-skelter early albums, the band honed their unique sound while learning to actually play their instruments, building a considerable reputation with their bawdy on-stage antics and use of props ranging from fireworks to live chickens. For their sixth studio album Arabia Mountain (2011), the band teamed up with famed producer Mark Ronson, resulting in just enough polish to woo critics and land the record on several year-end lists. Following the early-2014 release of their seventh album Underneath the Rainbow, the band hit the road for another rollicking North American tour.

"The floor was pulsating from the dancing. Cole threw his guitar into the crowd at the end. I went stage diving, as did a number of other folks...It was a great show!"

"I was blown away. such a rad vibe from everyone. Black Lips you are flipping glorious."

"Best show I've seen in a long time. So much energy and fun. You could tell the band was having as much fun as the crowd."