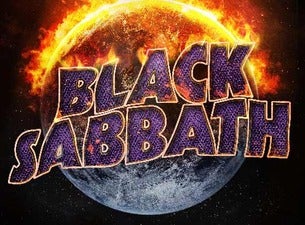 Founded among the steel mills of Birmingham, England in 1968, guitarist Tony Iommi, bassist Geezer Butler, singer Ozzy Osbourne, and drummer Bill Ward formed what would arguably become the greatest heavy metal band of all time. Initially a heavy blues rock band named Earth, the band took occult and horror themes and combined them with heavily distorted down-tuned guitars and invented a genre that is as vibrant today as ever. Black Sabbath also composed songs dealing with social instability, political corruption, substance abuse and war. Releases such as Black Sabbath (1970), Paranoid (1970) and Master of Reality (1971) are looked upon as vanguards, records which influenced artists as varied as Iron Maiden, Metallica and Soundgarden.
Black Sabbath was inducted into the Rock and Roll Hall of Fame in 2006. Ranked by MTV as the "Greatest Metal Band" of all time, they have sold over 70 million records and countless concert tickets worldwide.

Black Sabbath  has had its share of tumult throughout the years -- Tony Iommi has been the only constant in the band. Singer Ozzy Osbourne's substance abuse issues led to his departure in 1979. He was ably replaced by Rainbow’s Ronnie James Dio. But after several successful albums and concert tours with Dio at the helm, Sabbath entered a period of constant change throughout the ‘80s and ‘90s. Ian Gillan, Glenn Hughes, Ray Gillen and Tony Martin all took turn as front men until Osbourne reunited with his band mates in 1997. Since then, Black Sabbath has reformed to play concert tours and record on several occasions, lastly upon the 2013 release of the band’s 19th studio album, 13, which featured all original members sans Bill Ward.