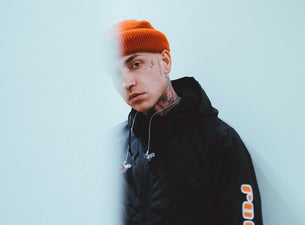 Blackbear's high-energy shows direct the spotlight onto his moody, emotional R&B jams. A jack of all trades in the music business, he also shows off his many talents in concert, hopping behind the keyboard stand and picking up guitars while hitting his signature high notes. Pairing simple yet effective video treatments with his gritty music, Blackbear's concerts are a feast for all the senses — and feelings.

Blackbear has been a force on the pop charts since 2012, when he co-wrote Justin Bieber's chart-topping smash "Boyfriend." In the following years he carved out a name for himself as one of pop-R&B's power players by collaborating with heavy hitters like fellow "Boyfriend" cowriter Mike Posner, hip-pop powerhouse G-Eazy and rap-rock superstars Linkin Park. The man behind Blackbear, Mat Musto, was born in Pennsylvania in 1990. He began his music career in Florida in his teens as the vocalist for the pop-punk band Polaroid, but shifted his focus in the early 2010s to the emotionally resonant R&B he's known for these days. He self-released his 2015 debut Deadroses, which included the G-Eazy team-up "90210," and followed it with another self-released album, Help. Eventually he signed to Interscope, releasing his gold-certified third album, Digital Druglord, in 2017 and Anonymous in April 2019, which featured the singles "1 Sided Love" and "High1X." Blackbear has remained extremely productive over the years, co-writing for Nick Jonas and Mike Shinoda as well as producing releases by Gnash and Tyler Carter in addition to his own touring and recording.