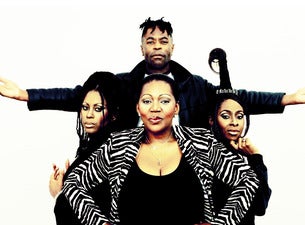 It's not easy being a Euro-disco superstar, but Liz Mitchell has been holding down the role with aplomb since 1975. Back then, Mitchell was the backing vocalist for the band known as Boney M., which was essentially the studio-recording act of disco producer Frank Farian. Farian collected a super-talented crew of European performers of Afro-Caribbean heritage to help him lip-sync his disco hits before live audiences; Mitchell, born in Jamaica and raised in London, fit the bill. Soon after relocating to Germany to join Farian, Mitchell was contributing her actual vocals, seriously powerful but also smooth and accessible, to Boney M., alongside Farian, fellow Jamaican vocalist Marcia Barrett, and two other members. Before long she was contributing to Farian's songwriting and record-producing, becoming the de facto lead singer of Boney M. as the group recorded and toured on their first album, Take the Heat Off Me. Over the course of seven more albums, several lineup changes, and 10 more years, Boney M. released a slew of disco-inflected pop hits that took over discos and televised music performances all over Europe and the U.K., scoring several No. 1 hits and selling millions in the process. In 1986, Farian broke up the group to move on to other projects, giving Mitchell sole permission to use the name Boney M. for her solo career.

Today, the group known as Boney M. featuring Liz Mitchell counts only Mitchell as an original member. Backed by younger singers — the same band format of three women and one man — Mitchell is still a powerhouse vocalist and energized, radiant performer, interpolating cover versions of reggae and disco hits alongside EDM-updated versions of Boney M. classics like "Daddy Cool," "Brown Girl in the Ring," and "Hooray! Hooray! It's a Holi-Holiday." Boney M. Featuring Liz Mitchell shows are incessantly high-energy, as much about individual performance as audience participation. They play to packed festivals and concert halls across Europe and, after all this time, have graduated to major concert halls in the U.S.