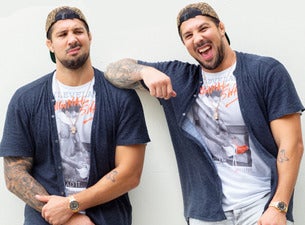 While stand-ups all get some hard knocks while developing their craft, few blows can compare with the kind Brendan Schaub received in his former career as a professional mixed martial artist. Before the Colorado native became a podcaster and performer, Schaub spent six years competing in the Ultimate Fighting Championship (UFC). Surely handling hecklers is no big deal for a comic whose former job meant dodging round kicks.

Although that transition may surprise MMA fans who watched him in the Octagon, it was a natural step for a comedian and storyteller who pairs a relatable, every-guy manner with quick wit. Schaub’s second career began when he met comedian Bryan Callen on the set of The Ultimate Fighter, the reality TV competition show on which Schaub was a contestant in 2009.

The friendship between the UFC vet and the former MADtv cast member led to ‘The Fighter and the Kid,’ a comedy podcast that debuted in 2014. Thanks to its uncut mix of commentary about the MMA world and colorful anecdotes from both men’s wild lives, their hit podcast now averages 9 million downloads per month. Its success prompted a national live tour and appearances on many other TV events, including live UFC bouts with their friend Joe Rogan.

In 2016, Schaub and Callen collaborated on ‘The Fighter and the Kid 3D,’ a live-action sketch-comedy incarnation of the show that debuted at No. 1 on iTunes’ comedy chart. Schaub also built a loyal following through his own podcast, ‘Big Brown Breakdown’ — which garners more than 4 million downloads per month — and his appearances on E! Network after-shows for the Golden Globes and the Grammy Awards.

When Callen first suggested that Schaub try stand-up as they were conceiving the stage version of their podcast, he thought he was nuts. But then Callen and Rogan convinced him he had all the skills he needed. “You’re a great storyteller,” they told him. “You’re just gonna tell stories.”

What began as 10-minute solo stints became full-fledged and fully hilarious stand-up sets at such fabled clubs as the Comedy Store and the Laugh Factory. Eager to follow the lead of another notable UFC retiree and become what he jokingly calls “the C.M. Punk of comedy,” Schaub is back on the road to showcase material that will soon be featured in his debut Showtime special in late 2019.