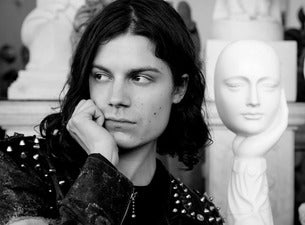 Indie darling BØRNS puts an unexpected twist on pop music by incorporating ‘70s glam rock with electronica elements to make super catchy tracks. Building on the grandiose rock sound of bands like T. Rex and Mott the Hoople, BØRNS gets fans grooving to the fuzzy riffs and driving beats he brings to every venue. Ticket buyers are consistently floored by his sharp attention to detail, which includes the cascading keyboard lines and creative drum samples that bring standouts like “Electric Love”, “10,000 Emerald Pools”, and “Past Lives” vibrantly to life. The singer-songwriter’s powerful vocals blend perfectly with his backing band’s lush harmonies, engulfing the audience in a wave of beautiful sounds. With his fresh take on mainstream pop and his impressive live shows, BØRNS always leaves his diverse group of fans screaming for more.

A professional magician at the age of 10, Garrett Borns was destined to perform. Originally raised in the suburbs of Grand Rapids, MI, the prodigious young artist relocated to New York before eventually settling in Los Angeles in 2013. There he assembled a band and switched his stage name to BØRNS, and in 2014 he released his debut single “10,000 Emerald Pools”. In early 2015 he made his national television debut on Conan, which helped him land an opening tour spot for indie pop band MisterWives. Following his well-received 2015 debut album Dopamine, BØRNS further grew his fanbase on tours with emerging popstar Charlie XCX and indie pop band Bleachers. He’s also become a festival favorite thanks to passionate performances at Lollapalooza, Life Is Beautiful, and Austin City Limits, and fans can’t wait to see what he conjures up next—both on stage and in the studio.