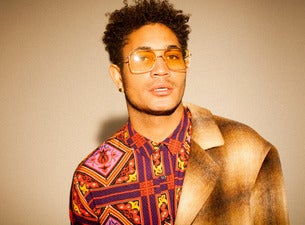 Combining a sultry R&B vibe, pure pop appeal, ‘90s alt-rock edge, and the bounce of classic West Coast hip-hop, Bryce Vine's ‘Wedding Singer'-inspired single "Drew Barrymore" was bound to attract attention. In addition to racking up over 72 million Spotify streams, "Drew Barrymore" earned the L.A.-based singer and rapper his first foray into Billboard's Hot 100 and his first-ever televised appearance on ‘Late Night With Seth Meyers.' Clearly Bryce Vine was making good on the potential that inspired Entertainment Weekly to name him one of the artists "who will rule 2018," praising his ability to infuse "hip-hop tunes with an alternative feel in ways that, well, actually rock."

Fusions is second nature for Bryce Vine. Before taking his stage name (a spin on "vinyl"), Bryce Ross-Johnson was born in New York, then came west when his actress mother landed a role on a soap opera. She bought him his first guitar at the age of 13, around the same time his father turned him on to ‘90s R&B. Yet Vine's teenage years were more about the scrappier sounds and attitudes of Green Day and Fall Out Boy, two alt-rock heroes that inspired him to form a punk band in high school. J. Cole's storytelling skills were equally influential as Bryce began forging his own style. He got valuable help when he met "Sir Nolan" Lambroza, a fellow student at the Berklee College of Music, and a future producer to Shawn Mendes and Selena Gomez.

Released in 2014, Bryce Vine's debut EP ‘Lazy Fair' marked a bold break from the norm as the effervescent "Sour Patch Kids" garnered 16 million plays. The 2016 EP ‘Night Circus' was just as distinctive thanks to "The Thug Song," a satirical take on gangsta-rap stereotypes powered by a very un-gangsta Green Day sample.

Meanwhile, Bryce Vine built up a fierce reputation as an energetic live performer, sharing stages with G-Eazy, Big Sean, and Kyle. "Drew Barrymore" and his debut album on Sire bring headliner status and greater chances for Bryce Vine to show just how original he can be.