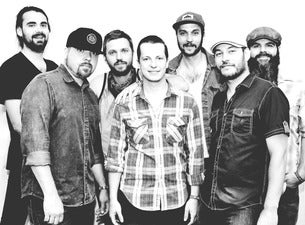 Cabinet has been serving up their unique take on Pennsylvania bluegrass since 2006, treating fans across the country to music that's as playful and adventurous as it is rooted in tradition. Folksy, country-tinged tunes like "Heavy Rain" and "The Tower" are brimming with energetic percussion, impressive banjo fingerpicking, and catchy fiddle riffs, providing the perfect musical backdrop to the band's Americana-inspired tales of country life. This is music for stomping your boots to, and Cabinet never fails to deliver with their rollicking performances on tour.

Cabinet was formed in Pennsylvania in 2006 by a group of musicians hailing from diverse backgrounds that included country, folk, and -- of course -- bluegrass. They released their self-titled debut later that year and attracted the attention of Ropeadope Records, which re-released the record along with a trio of live albums that followed. The first of those -- This Is Cabinet - Set I -- showcased their infectious live energy and knack for blending country and bluegrass elements. The second release -- This is Cabinet - Covers -- followed in 2011, and in 2013 the band dropped This is Cabinet - Set II. Along with these live offerings, the band has released several studio albums including 2012's Leap, which was recorded over four days in front of a live studio audience. Passionate and genuine performers known for pushing the boundaries of bluegrass while remaining rooted in its traditions, Cabinet continues to captivate with down-home performances on tour.