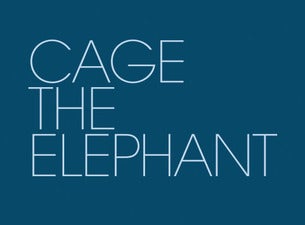 Cage the Elephant is a powerhouse rock and roll band from Bowling Green, Kentucky, that combines blues, classic rock, and funk into an eclectic and raucously fun sound. They formed in 2006 and signed to Relentless Records after playing the 2007 South by Southwest music festival. The band’s self-titled debut studio album was released in 2008 to commercial and critical success, spawning singles “Free Love,” “In One Ear,” and the hit “Ain’t No Rest for the Wicked,” catapulting the band into the UK and US mainstream. Their sophomore album Thank You, Happy Birthday reached No. 2 on the Billboard 200 chart with singles “Shake Me Down” and “Around My Head.” Cage the Elephant toured relentlessly for ticket holders in 2009 and 2010, opening for Foo Fighters, Manchester Orchestra, Silversun Pickups and Stone Temple Pilots. Their third studio album Melophobia came out in October 2013 on RCA Records with the single “Come a Little Closer,” opening up their sound with alt-rock and punk textures. They will finish out the year in concert with their high-octane and kinetic live show in support of Muse.