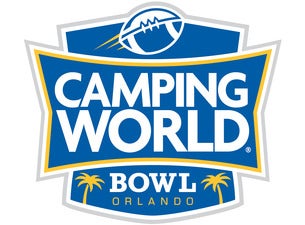 Known by many names since its founding in 1990, the Camping World Bowl, played at Camping World Stadium, is a sort of scrappy younger sibling to the more established Florida bowls, the Orange and the Citrus. Over the years it has been called the Blockbuster Bowl, the Carquest Bowl, the MicronPC Bowl, the Visit Florida Tangerine Bowl, the Mazda Bowl, the Champs Sports Bowl and the Russell Athletic Bowl. Originally played in Miami, the game moved to Orlando in 2001. Its current tie-ins are the ACC and Big 12.

Perhaps the bowl's biggest matchup was its first, a 1990 showdown between the No. 7 Penn State Nittany Lions and the No. 6 Florida State Seminoles. The Seminoles won, 24-17, with John Davis securing the victory with an interception with a few minutes remaining. The game has seen its share of scoring, too. The Illinois Fighting Illini in 1999 hung a record 63 points on the Virginia Cavaliers. Over a three-year period, the bowl saw its winning teams put up 55 points (the Texas Tech Red Raiders in 2002), 56 points (the NC State Wolfpack in 2003) and 51 points (the Georgia Tech Yellow Jackets in 2004). In the 2018 edition, the No. 17 Syracuse Orange topped the No. 15 West Virginia Mountaineers, 34-18.

Owned and operated by the city of Orlando, Camping World Stadium was built in 1936 under the auspices of the Works Progress Administration. Then called Orlando Stadium, it had a stadium capacity of 8,900. As college football grew so did the stadium. By the end of the century, the Florida Citrus Bowl, as it was known, was a fully modern, 65,000-capacity facility. It got another series of upgrades and, in 2016, a new name. Today, Camping World Stadium visitors will find clean sightlines and plenty of tailgating opportunities near the stadium.