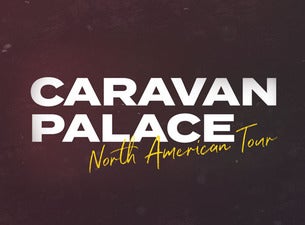 Dubbed "electro-swing," Caravan Palace's irrepressible musical mélange is nothing if not infectious. Swing music has always been dance music, but when you mix it with modern bass, electronic beats and studio trickery, it becomes party music on steroids. Caravan Palace's version is exuberant stuff, filled with horns and the vintage ‘20s vocal stylings of French singer Zoé Colotis. Colotis is filled with pixie-ish energy, and in a live show, when she promises you're about to have fun, you'd better believe her. Her feet are liable to break out into a choreographed Charleston at any moment, and her clear, bell-like voice plays master of ceremonies to a swirling, manic sound. The group's world tours are known to sell out, thanks both to the live spectacle they put on and a devoted fan base that likes to dress up (think zoot suits and bowlers).

The Parisian septet claims both Django Reinhardt and Daft Punk as inspirations, but those influences don't fully capture the group's palpable joie de vivre. For all the electronic flourishes, Caravan Palace are not just knob-twiddlers: The core players started out as jazz musicians, and multi-instrumentalists at that. They reportedly first came together to fashion a soundtrack for an adult silent film. After a handful of Internet singles, their self-titled debut came out in 2008, and the single "Jolie Coquine" hit the European charts. Their second LP, Panic, followed in 2012, but it was the group's third album, 2015's Robot Face, that took them into the stratosphere with the insanely infectious single "Lone Digger." (Within months, it had racked up tens of millions of YouTube views.) The band parlayed that success into a move to their own label, and 2019's "Chronologic" trafficked in the same vintage vibe while pulling in new collaborators, including vocalist Charles X. But experimental directions, while enjoyable, cannot dilute the sheer vibrant power of this group, which has such a good time on stage that the audience can't help but have an amazing time, too.