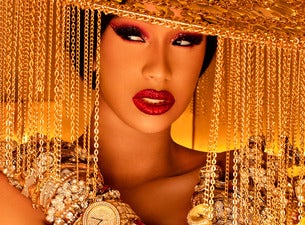 Cardi B In Concert

When Cardi B steps onstage, her presence is felt. It's in the army of dancers that flank her. It's in the chest-rattling bass that booms through the speakers. It's in her colorful nails, unfurling hair extensions, and sparkly couture. But more than anything, it's in her infectious personality, which emerges through fierce rhymes, lyrics that run heartfelt to hilarious, and filter-free banter that somehow paints her as both an icon of swagger, and a "regular degular shmegular girl from the Bronx," as she once put it. Starting with her runaway 2017 hit "Bodak Yellow" — the first rap song by a solo female artist to hit No. 1 in 20 years — Cardi B has been breaking records and collecting praise nonstop. She's done it as a guest on massive singles by Bruno Mars, G-Eazy, and Maroon 5, but more often on her own. Her 2018 debut album, ‘Invasion of Privacy,' smashed a handful of glass ceilings in sales – making Cardi the first woman to win Best Rap Album at the Grammys, and spawning an international hit in the bilingual "I Like It." To call Cardi B a trendsetter or star doesn't do her justice. She's a force of nature.

Cardi B's background is just as important to her story as her successes. Her multicultural heritage, pronounced New Yawk accent, take-me-as-I-am attitude, and wealth of experience as a woman struggling to win against long odds are all essential elements of the personality that blares from her songs and shows. She was born in the Bronx to a Dominican dad and an Afro-Trinidadian mom. Money didn't flow, but music did. Young Cardi listened to innovative rap stylers like Missy Elliott alongside hardcore no-frills rhymers like Trina. But her own entry to music came after a few detours — she proudly owns her past as a stripper, and parlayed her fame as a viral Vine personality into a role on ‘Love & Hip Hop: New York.' But she wisely left reality TV to pursue music in 2016. After a couple of mildly buzzing mixtapes (the ‘Gangsta Bitch Music' series), she hit it big with "Bodak Yellow," a swaggering trap anthem that would be certified seven-times platinum by the end of 2018. That year skyrocketed Cardi onto tons of magazine covers, into collaborating with huge stars like Jennifer Lopez, appearing on ‘Saturday Night Live,' releasing her universally beloved first album, and breaking countless records both commercial and critical.