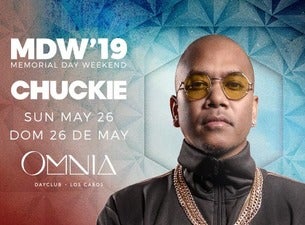 Dutch DJ/producer Chuckie is a progenitor of the nascent dirty house scene, helping create the genre with his Dirty Dutch series of albums characterized by needly synth lines over Latin-infused EDM beats. His appeal to fans verges on a full-out cultural movement, drawing hordes of beat-hungry followers to club events featuring dancing, state-of-the-art light shows, and other interactive stage elements. Hot on the heels of a lauded New Year’s Eve performance at the Cosmopolitan in Las Vegas, Chuckie has fans chomping at the bit for tickets to his 2014 club dates.

Chuckie's Latin roots help explain his unique brand of house music — born in Paramaribo, Suriname, he grew up influenced by the small nation's multi-cultural music scene, beginning to earn a reputation for his innovative mixes as a DJ during high school. After his early singles began climbing the Dutch charts in the mid-2000s, Chuckie kicked off the Dirty Dutch album series with his 2007 full-length release of the same name.  A slew of albums, singles, and remixes would follow, including productions for T-Pain, Lil Jon, and Marina and the Diamonds. While his reputation as a producer has continued to build, Chuckie's skills as a live performer continue to be his biggest strength, making him one of the most coveted international club DJs in the world.