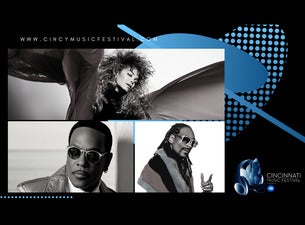 Cincinnati is proud of its rich musical history. Most notably, the Queen City was home to the storied label King Records, whose imprint, Federal, issued the hit single "Please, Please, Please" from James Brown's first band, the Famous Flames.

It's quite fitting, then, that Cincinnati is also home to the Cincinnati Music Festival Presented by P&G, one of the longest-running (and most successful) R&B and soul concerts in the U.S. Cofounded by promoter Dino Santangelo and George Wein initially as a jazz-focused festival, the multi-day event now consistently draws the genre's biggest names. For example, Brown eventually performed at the event — as have other soul and R&B luminaries, including Whitney Houston and her cousin, Dionne Warwick, along with Luther Vandross, Marvin Gaye, Patti LaBelle, Mary J. Blige, Usher, Stevie Wonder, Gladys Knight, Al Green, Maxwell, and Ella Fitzgerald.

The Cincinnati Music Festival Presented by P&G dates back to 1962, when it launched as the Ohio Valley Jazz Festival. The inaugural year of the fest boasted amazing talent — to name a few players, Louis Armstrong, Dave Brubeck, Duke Ellington, and Sonny Rollins. The event moved around a bit in its early years, first from the Carthage Fairgrounds to Crosley Field — where, in 1964, John Coltrane, Count Basie, Lou Rawls, Aretha Franklin, and Dizzy Gillespie performed — and later from there to Riverfront Stadium, before the event eventually settled in to its current location of Paul Brown Stadium. Along the way, the concert expanded its focus to include soul, R&B, and even hip-hop, which grew its audience even more.

The festival also became known for many years as the Macy's Music Festival before being rechristened the Cincinnati Music Festival Presented by P&G in 2015. What hasn't changed, however, is a commitment to booking top-notch talent that reaches multiple generations of music fans in Cincinnati and beyond.