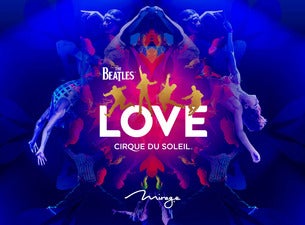 With LOVE, Cirque du Soleil celebrates the musical legacy of The Beatles through their timeless, original recordings.  Using the master tapes at Abbey Road Studios, Sir George Martin and his son Giles Martin have created a unique soundscape of The Beatles music for the show.  The exuberance of The Beatles is channeled through the youthful, urban energy of a cast of 60 international artists.  With panoramic sound and visuals, audiences experience The Beatles as never before...

PLEASE BE ADVISED
Doors Open at 6:30 p.m. and 9:00 p.m.
Please be advised that strobe lights and theatrical fog are used during performances. Guests who react to either of these effects should attend the show at their own risk.
Late arrivals will be held in the lobby until an appropriate interval in the performance for both the guest and artist's safety.