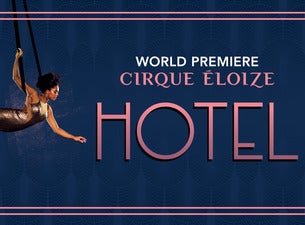 The fun begins the moment you check in to Cirque Éloize's Hotel. Inspired by the Montreal cirque's far-flung international travels, the company has performed more than 5,000 times in some 600 cities located in 60 countries to date. Éloize's 25th-anniversary production mixes acrobatics with theater, choreography, and live music.

Hotel, which premiered in August 2018, tells the story of travelers intersecting and colliding in an elegantly avant-garde space that combines the majesty of 1920s grand hotels with the razzle-dazzle glitter, disco lighting, and hip-hop DJs of a contemporary New York nightclub.

The show also serves as a tribute to great movie comedians. César Mispelon and Julius Bitterling's hand-to-hand contortions pay homage to Charlie Chaplin while suggesting an especially acrobatic version of the party game "Twister." Harold Lloyd serves as inspiration for hotel concierge Antonin Wicky's befuddled evocation of the silent comedian dangling from the hands of a skyscraper clock in Safety Last! And the madcap hallway scene from the Marx Brothers' 1929 film debut The Cocoanuts is echoed in a wild lobby scene involving the full company.

The production's featured singer is Sabrina Halde, of Montreal indie-pop band Groenland, who croons sultry gypsy-jazz numbers as the cirque's dozen acrobats swirl around her. Hotel concludes with its entire cast playing instruments onstage in a mini-concert finale.

Cirque Éloize (meaning "heat lightning" in Acadian French) was founded in 1993 and has produced 15 shows that have reached more than 3 million spectators. Its international cast hails from Russia, Canada, France, Switzerland, and the U.S., among other countries. Fortunately, this is one Hotel that doesn't require you to submit a passport for admittance.