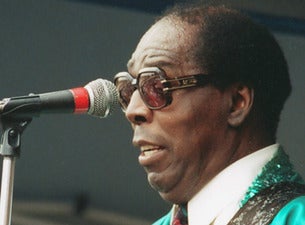 Southern blues icon Clarence Carter has been entertaining audiences with his soulful jams, earthy voice, and animated live performances for more than five decades. Carter is known for skillfully blending genuine emotion and ribald wit, and songs like "Patch" and "Strokin'" are as tender as they are fun. At his intimate live performances, Carter relishes the role of emcee, introducing songs with highly personal -- and often hilarious -- anecdotes. Whether he's playing a selection from his late '60s chart run or getting fans dancing with bumping '80s cuts like "Dr. C.C.", Carter always leaves ticket buyers feeling good with his energetic, passionate performances on tour.

Montgomery, Alabama-born Clarence Carter was blind from birth, and he used music as a form of expression during his childhood. He taught himself guitar by listening to the blues records of John Lee Hooker and Jimmy Reed, and in college he learned to transcribe chord charts and arrangements in Braille. In 1960 he began performing with fellow singer and classmate Calvin Scott, first under the moniker Clarence & Calvin and later as the C & C Boys. After Scott was seriously injured in a car accident, Carter carried on as a solo act, achieving his first commercial success in 1967 with the single "Tell Daddy". A string of late-'60s R&B hits followed including "Slip Away", "Snatching is Back", and the racy holiday favorite "Back Door Santa". Carter's commercial success continued into the mid-'70s before the rise of disco led to a wane in sales, but he enjoyed another surge in popularity during the '80s with a funky new sound and raunchy underground favorites like "Strokin'" and "Dr. C.C.". He continued to release albums steadily over the next three decades, touring extensively both in the US and abroad. A veteran performer with more than 30 albums under his belt, Carter continues to wow fans with career-spanning performances on tour.