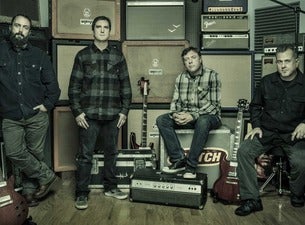 Maryland-bred rockers Clutch have been a  hot ticket on the tour circuit and a mainstay on the rock radio airwaves for well over a decade. That streak continued in 2013 with the release of a well-received new album titled Earth Rocker, which topped Billboard's Top Hard Rock Albums chart, and plenty of concert dates. The group's consistency even extends to its lineup, which features three members -- Neil Fallon (vocals, keyboards), Tim Sult (lead guitar), Dan Maines (bass), and Jean-Paul Gaster (drums) -- who have been in the group since it formed in 1991.

Clutch released their debut album, 1993's Transnation Speedway League, after landing a deal with EastWest Records, largely thanks to their reputation as a strong concert act. The band's growing fan base and the success of their self-titled 1995 sophomore release lead to a short-lived major-label deal with Columbia. Clutch's 2009 and 2013 albums, their ninth and 10th, were released on the group's own Weathermaker label.