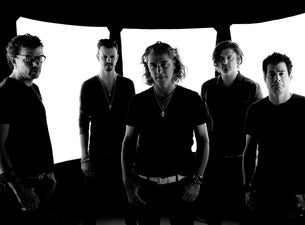 Collective Soul have married monster riffage to memorable hooks ever since they started dominating airwaves in the ‘90s. Today, the hard rock standard-bearers are still bringing the same ferocity that made them famous to all their live shows. On standouts like “Shine”, “The World I Know”, and “December”, lead singer Ed Roland’s killer pipes are guaranteed to floor audiences. As fans sing along to the hits they know by heart, the rest of the band delivers blazing riffs, precise drum beats, and driving basslines that come together like a sonic stampede. Now Collective Soul has thrilled fans with the announcement of the See What You Started Tour in 2015, as they promise to rock cities across America with their classics and new favorites.

After studying guitar and songwriting at the Berklee College of Music, Ed Roland returned to his home of Stockbridge, GA and formed several bands in the early ‘80s. Failing to move beyond his local scene, he attempted to sell his songs to a publishing company with a 1993 demo tape entitled Hints Allegations and Things Left Unsaid. Instead (thanks to some help from his local DJ friend) the song “Shine”  became a surprise radio hit and Atlantic Records released the demo in 1994 as the band’s de facto debut. The sudden attention lead to requests for live performances, and Roland quickly formed a touring lineup for Collective Soul. They immediately took to the studio to work on their polished 1995 self-titled album, which became a triple-platinum success with singles like “December”, “The World I Know” and “Where the River Flows”. In addition to the four standouts from their first two albums, the group went on to have three more #1’s on the Modern Rock chart: “Precious Declaration”, “Listen”, and “Heavy”. More than 20 years into their musical journey, Collective Soul continues to rock out at their gripping live performances and on their hard-hitting albums, including 2015’s See What You Started by Continuing.