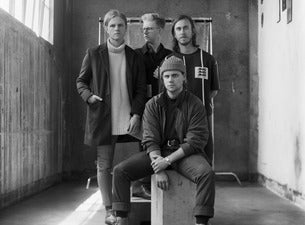 Listening to Colony House feels like cruising down the highway with your best friend, windows rolled down and sunny skies ahead. The indie trio combines modern rock with classic pop in the vein of Cold War Kids, Coldplay, and Keane, but with a hint of country twang that pays homage to their southern Tennessee roots. Frontman and songwriter Caleb Chapman specializes in crafting heart-on-sleeve songs about hope, perseverance, and triumph in the face of struggle, and the result is a wonderfully upbeat collection of tracks. In concert the band embodies that sense of optimism by creating a fun atmosphere with crowd favorites like "Silhouettes" and "Keep On Keeping On". Their blend of bright guitars, tight harmonies, honest songwriting, and undeniable charisma ensures a blissful concert experience that ticket buyers won't soon forget.

Singer Caleb Chapman and his brother, drummer Will Chapman, hail from musical roots -- they're the sons of Christian pop superstar Steven Curtis Chapman. In 2009 they met drummer Scott Mills through a mutual friend and the three then-high school students formed their own indie rock trio, which they originally called Caleb. In 2013 they changed their moniker to Colony House in honor of the apartment complex in Franklin, Tennessee, where they lived together during the band's early days. They self-released three EPs -- Colony House, Trouble, and To The Ends Of The World -- before signing with New York-based Descendant Records in 2013. Their debut full-length album, 2014's When I Was Younger, cracked the Top 3 on Billboard's Heatseekers Albums chart and its lead single "Silhouettes" received heavy airplay on alternative rock stations across the U.S. On the live circuit they've toured alongside indie rock groups including Youngblood Hawke, Kongos, and Augustana, delivering their spectacularly cheerful live shows to lucky ticket buyers nationwide.