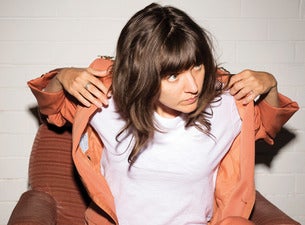 Australian alt-rock up-and-comer Courtney Barnett is quickly making a name for herself with her witty lyrics and deadpan vocal delivery. Fans of clever wordplay and surprising lyrical juxtaposition will find much to love in jangly gems like "Avant Gardener" and "History Eraser", and Barnett's performance style -- a mixture of shambling ease and surprising precision -- perfectly complements the complex personality she reveals through her music. Barnett is still a relative newcomer, but she's already generated significant excitement for future tour dates with pitch-perfect performances at  showcases around the world.

Born in Melbourne, Barnett attended the Tasmanian School of Art before returning to her hometown to pursue music full-time. After a stint playing with The Dandy Warhol's Brent DeBoer in a band called Union, she made her EP debut in 2012 with I've Got a Friend Called Ferris. She quickly followed up with her full-length debut album How to Carve a Carrot into a Rose, garnering a Best New Music nod from Pitchfork and hitting the road for extensive touring. In late 2013 she caught the eye of Rolling Stone and The New York Times with her performances at the CMJ Music Marathon, with both outlets naming her one of the festival's standout acts. A bright young talent with a diamond-sharp wit, Barnett has fans eagerly awaiting her next tour dates.